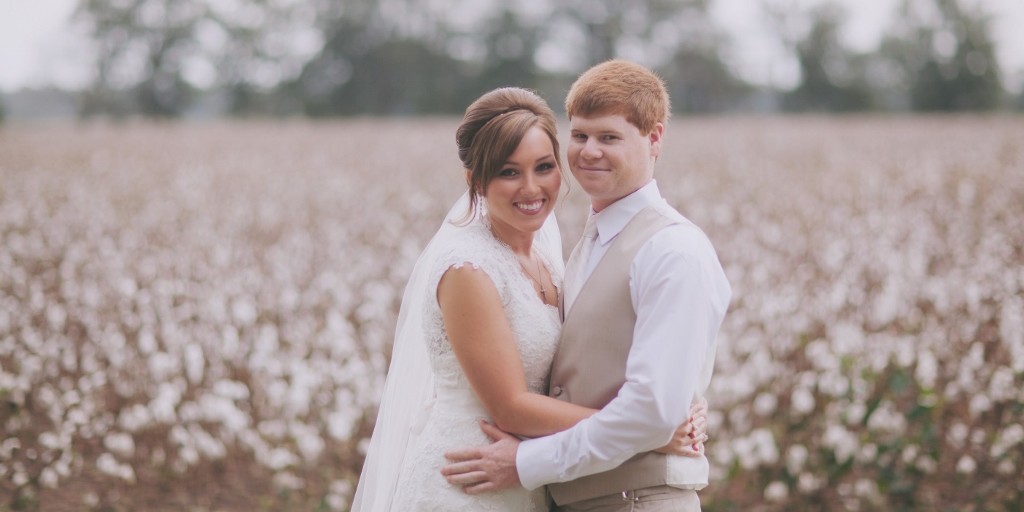 Parker Shea Hardin and Alan Woodcock were united in marriage at five o’clock in the afternoon on October 11, 2014, during a nostalgic ceremony performed underneath a wedding arbor handcrafted by the groom’s father facing a spectacular cotton field brimming with acres of snowy, cotton against a pink sunset just behind the beautiful, white-clad, century old home of the bride’s grandparents’, Mr. and Mrs. A.W. Parker in Big Creek.

The Night of the Dreams

“The bride’s cake featured square layers of vanilla cake, iced with Italian meringue buttercream and decorated with swirls of icing on each of the layers in white with the exception of the top layer finished with amethyst icing and swirls topped with fresh flowers and silver “W”. The bride’s cake table was decorated with a beautiful floral arrangement held in an heirloom crystal vase while other serving tables were adorned with antique metal water jugs formerly used in cotton fields that held arrangements of freshly-picked cotton.  The groom’s cake was a three-layered chocolate confection filled with chocolate ganache, iced with Italian meringue buttercream, and decorated with chocolate-peanut butter cups and topped with an anchor signifying the groom’s career at sea. Both cakes were created by Mitzi McCostlin of Bruce. All handmade floral arrangements featured at the ceremony and the reception was created by floral designers and wedding coordinators, Melanie Taylor and Tyanne Bailey. As the night concluded, guests were directed to a table that held a borrowed vintage suitcase filled with sparklers; an antique wooden dough bowl held the wedding favors and the couple departed at the blue hour through sparklers held by their friends and family.”